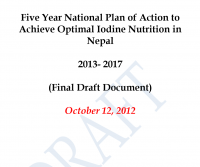 A Five-year National Plan of Action for the Elimination of Iodine Deficiency Disorders (IDD) for the period between July, 1997 and June, 2002 was instrumental in initiating a new wave of IDD elimination efforts in the country. The Plan prioritized Universal Salt Iodization (USI) as the primary intervention to improve iodine status while reducing reliance on iodine supplementation, which had been in place earlier.