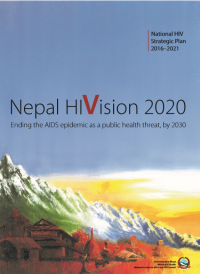 After Nepal’s first case of HIV was diagnosed in 1988, the epidemic increased rapidly in the 1990s through injecting drug use. This was successfully brought under control. Although injecting drug use is still an important route of transmission of HIV in Nepal, the current major mode of HIV transmission is sexual, accounting for 85% of new infections. At the time of development of the National HIV Strategic Plan, at the end of 2015, there were an estimated 39 397 people living with HIV in Nepal, with an adult HIV prevalence of 0.2%. New HIV infections peaked in 2000 and then declined rapidly and significantly from over 7 500 in 2000 to 1 331 in 2015.