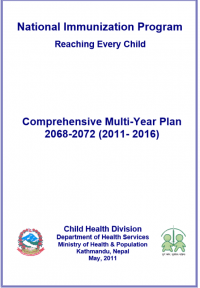 As per the Nepal's interim constitution 2006, health is considered as a right of the people. The Ministry of Health and Population (MOHP) in its Nepal National Health Sector Programme Implementation Plan (NHSP-II, 2010-2015) has a goal to improve the health and nutritional status of the Nepali population, especially for the poor and socially excluded. In the area of child health, it has a target to reduce under five mortalities to a level of 38 and infant deaths to 32 per 1,000 live births by 2015 with several interventions including: sustaining community based integrated management of childhood illness (CB-IMCI), maintaining immunization coverage above 90% and scaling up community based newborn care.