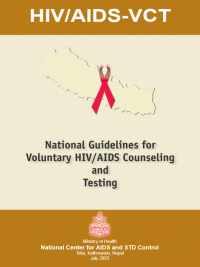 In Nepal, the first case of AIDS was reported in 1988. The national HIV sentinel surveillance system has provided data that indicate there were around 60,018 people living with HIV/AIDS and 2958 AIDS related deaths by 2002. It is estimated that HIV prevalence is around 0.5 percent in the general adult population. Behavioral data shows a high potential for an increased spread of HIV from high-risk groups to the general population.